Our first dive trip to Mauritius happened by chance when a couple of our good friends decided to get married, and invited us to join them there for their wedding. We had heard from others that the diving was pretty good and so we excitedly booked to stay in the Lux* Grand Gaube hotel where the ceremony would be held. Before we left, we did some research on the various Dive centre’s that would be able to provide us with the diving we hoped to do whilst we were there.  The hotel itself supported a small DiveSail operation, but given the recent press on this particular company and the very high prices, we were keen to find a centre that would be more suited to our style of diving. Using the usual Google search I stumbled across the aptly named Dodo Divers, after the infamous extinct bird only found in Mauritius. Their website is very impressive due to the stunning photograph of the islands that surround Mauritius adorning the background (http://www.dododivers.com). They quote Mark Twain “God created Mauritius first, and then made a copy which he called Heaven” and they couldn’t be more right, especially when exploring the wonderful world beneath the Indian ocean. Within 24 hours of contacting Dodo Divers, I was emailed by the owner, Rose – a British woman from Peckham (south London, UK) who could not have been more helpful if she tried… and so our relationship with Dodo Divers began.

As underwater Photographers/Videographers, we travel to destinations that promise an abundance of life and interesting species we may not have seen before. Although we have been diving in the Indian Ocean previously, this was our first trip to Mauritius so we didn’t fully know what to expect from the diving. However, the moment we had finished the first dive we knew we had added another place to the list of top destinations.

Based in the North East, we were 1 hours drive from the airport and situated in the town of Grande Gaube. Dodo Divers was a 5-minute drive away in Calodyne so Rose came and collected us from the hotel and dropped us off afterwards making it the ideal spot for our trip.

The Dive centre itself is ideally situated for exploring the numerous dive sites in the North East including some of our favourites from the trip, Merville’s Patches, Anemone Garden, Grand Baie Aquarium and the impressive Silver Star wreck. The main building is right on the beach with changing facilities, wash tanks and a large table with lean-to roof out of the sun. The dive boat is perfectly set up with plenty of room for the equipment and kitting up whilst being sheltered by a canopy. There are no more than 14 people on it at any time ensuring you are comfortable both on and off the boat. The atmosphere is laid back and relaxed with everyone getting to know your names from the offset. This is not to say they don’t treat you like royalty though as you barely touch your kit or have to worry about anything since they take care of it all for you. 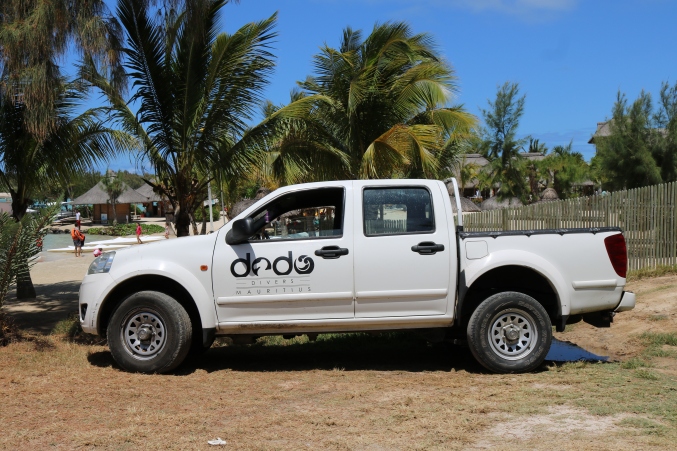 There is plenty to see in Mauritius and so much to capture on film. Richard had his Go-Pro Hero4 Black with Inon wide angle lens, and I had my Canon G7X in Nauticam housing with the Inon S-2000 strobe armed at the ready – for the first time ever my battery died on a 45 minute dive during this trip! Some of our favourite sites are called out below:

Merville’s Patches – This dive consists of a series of coral filled reefs teaming with fish but what  makes this site unique is the abundance of moray eels that live here. Under almost every rock there were a plethora of Moray’s – we even found 3 squeezed in one tiny hole as shown in the image below. 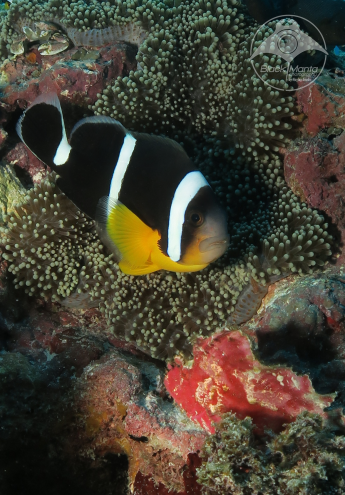 There was a beautiful Anemone with a resident black Anemone Fish – both were just stunning. We were also shown the unusual Leaf Fish, magenta in colour, this little creature would easily go unseen as it could be mistaken for a piece of coral. It wasn’t until I reviewed my images that I also noticed a small Anemone crab in the top left corner, capturing all three beauties in one go.

Shark Safari (Round Island & Snake Island) – The first thing to point out about these islands is that the Round Island isn’t round, and Snake Island doesn’t have any snakes – all the snakes live on Round Island. Go figure that one out!? These 2 small islands can be found a 60 min boat ride away from the North East coast. The main draw for these waters, that are rich in oxygen from the pulsating currents, are the sharks. This two dive safari set in a scene of huge wall drops offs and giant overhangs, that wouldn’t be out of place in the film Jurassic Park, did not fail to deliver. White tip and grey reef sharks can be found cruising these waters which are beautifully decorated with giant fan corals. If you’re serious about scuba diving then this is a must!

Silver Star Wreck – The Silver Star is a 57m fishing trawler that sank in 1987. She sits on a sandy bottom at 42m deep, and interestingly is the only shipwreck in the waters of Mauritius to still have her giant and very impressing propeller still intact. It seems all other wrecks have had theirs salvaged for the scrap value, so seeing her in all her glory made this dive all the more special. Because of the depth we had 15l tanks, and planned a dive with 6 mins of deco which was needed to cover this impressive wreck. Plenty to see on this dive from the giant propeller, penetration through the wreck revealing shoals of fish hiding in the dark, to the abundance of marine life that can be found on the deck, all the way up to the hard coral that has formed on the top of the mast. 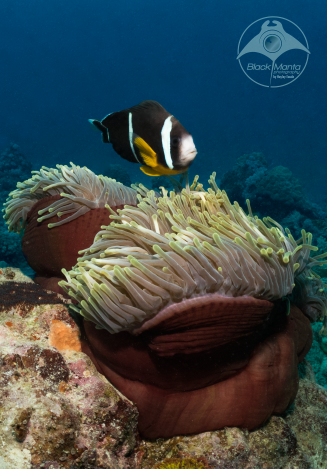 Grand Baie Aquarium – We were joined by our newly married friends (Silpa and Scott) on this dive which made it all the more special. A shallow dive of just 13m, you never know where to look as there is life literally everywhere! Shoals of Sgt Majors, Trumpet fish, baby Crocodile fish, and Leaf fish adorn the reefs brightly lit by the warm Mauritian sun. Without a doubt, the highlight being the most stunning and vivid purplish/red Anemone with their resident fish. Huge barrel looking things that look as though they’re made of the finest velvet – just stunning and have never seen anything like it anywhere!

Anemone Garden  – As the name would suggest, this dive site is littered with Anenome’s, but, and this is a big but, what we found will forever remain in my memory. In amongst the vivid coloured anemone that dominates the reef was the most beautiful white anemone – in all of the dives we have done around the world this was a first for us. Such a very special moment to remember!

Global Underwater Explorers – After recently undergoing fundamentals and technical GUE training, Dodo Divers is now the first dive centre in the Indian Ocean to offer GUE courses, with hopes of one day being the first GUE accredited centre. GUE (Global Underwater Explorers) is a world renowned high-level technical diving organisation geared towards training highly skilled technical divers, as well as putting emphasis on conservation and exploration work. Brining GUE to Mauritius will attract a whole new calibre of divers, and open up the as-yet largely undiscovered world of technical diving in the Indian Ocean. You can find more about GUE on their website: www.gue.com

Community work – In addition to the above, Rose and the team are working with a local marine conservation NGO, supported by Government ministers and ministries, on a project to generate greater awareness amongst Mauritian youths about the importance of marine life conservation efforts in Mauritius. As part of the project, over the next year, Dodo Divers will have groups of Mauritian school children between the ages of 10-15 coming to learn to dive with them, to open their eyes to the beauty of the underwater world that surrounds their Island. Rose says “we hope that by learning to dive, they will be able to relate more with the conservation workshops that the NGO are organising”. Just this week they had an MBC – Mauritius Broadcasting Corporation – press launch of the project.

Dodo Divers Team – It wasn’t just the quality of diving that impressed us but also the fantastic team at Dodo Divers. All the reviews say the same thing, that they go out of their way to make your experience special and that’s exactly what they did for us. A particular shout out to Anthony – one of the best dive guides we have ever come across. A friendly, intelligent Mauritian local, his air of authority is balanced with his likeability and humour meaning you trust him implicitly to provide fun whilst ensuring your safety. Anthony, also an accomplished photographer himself, was taking some really impressive photos with a compact camera. The other members of the team, Nadeem, Chang, Pascal, Manisha and the owner Rose were equally fantastic and made our diving truly exceptional, and we seem to have returned home with a newfound love of Justin Beiber – what can we say other than “I’m sorry”!.

From the minute we arrived at Dodo Divers, to the emotional farewell at the end of the week, we felt at home with this incredible group of people. They took care of everything and tailored the diving to our likes and requests meaning we enjoyed every single one. The world is a big place and has so much to offer – we have a list of dive destinations as long as Richard’s XL wetsuit that we wish to visit. With this in mind, we rarely plan to return to somewhere we have already visited – well until now that is. Hand on heart we will return not only to Mauritius to visit these beautiful waters but to Dodo Divers to visit what we can only describe as our new home from home.

We can’t write enough words to express how impressed we were with Dodo Divers, not only do we feel like we’ve had the most amazing diving experience in Mauritius, but we feel like we have made friends in the process. Magical Mauritius has stolen our hearts and we will 100% be coming back in the future, without a doubt diving again with Dodo Divers!